Look Up Your Legislator

Who Represents You in Congress?

Who Represents You in Albany?

Who Represents You in Broome County?

The Disability Integration Act (DIA) is a civil rights, bipartisan and bicameral legislation, introduced by Senators Charles Schumer, Minority Leader (D-NY) and Cory Gardner (R-CO) in the Senate and Representative Jim Sensenbrenner (R-WI) in the House, to address the fundamental issue that people who need Long Term Services and Supports (LTSS) are forced into institutions and losing their basic civil rights. The legislation (S.117, H.R.555) builds on the 25 years of work that ADAPT and other disability rights advocates have done to end the institutional bias and provide seniors and people with disabilities home and community-based services (HCBS) as an alternative to institutionalization. It is the next step in our national advocacy after securing the Community First Choice (CFC) option.Update: The bill was re-introduced in the current Congress on January 15th. There are 24 Senators signed on as of the end of January, 2019.  Both NY Senators are on the bill.  Congressman Brindisi, who represents the 22nd. District, was an original co-sponsor.

Our advocates are people with all kinds of disabilities, their family members, friends and people who live in our community. We care about the rights, freedoms, opportunities and supports people with disabilities need in order to live independently. We hope you will join us in our efforts. 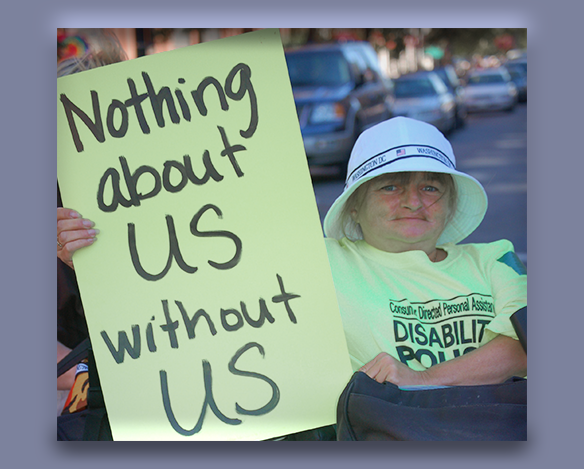